Here is why AMD’s StoreMI is amazing for gamers: 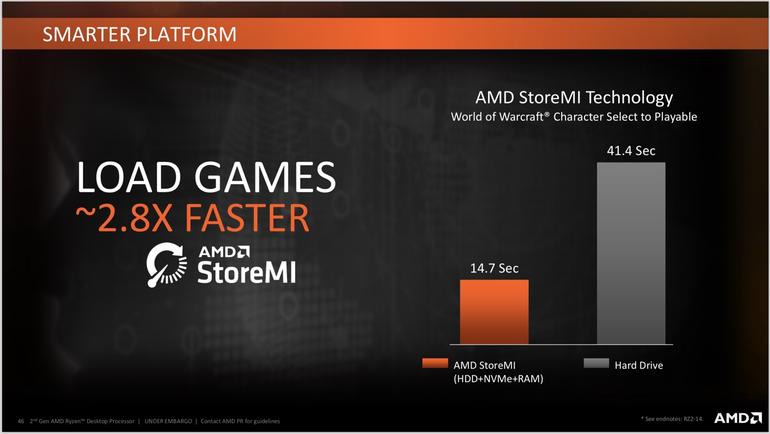 Historically gamers have had a bit of a dichotomy, you can opt for a HDD (hard disk drive, your regular option) to get lots of storage space at an affordable rate, or you can get really fast storage from an SSD, solid state drive,  for way more money per gigabyte than an HDD. With how big games have gotten, you aren’t going to fit that many on a 250GB SSD. Quite the predicament for the average gamer, so AMD has come up with a solution: StoreMI.

AMD has come to the rescue for gamers who purchase X470 chipset motherboards: they have licensed software from Enmotus that allows HDDs and SSDs (up to 256GB is fully supported) to be combined into a single logic drive (appears as one drive to the operating system), with the SSD functioning sort of like a cache, for frequently used files. For X470 users, this is free software, but for people on other AM4 socket motherboards, they can buy it here http://www.enmotus.com/amd . The vast majority of readers will likely have never heard of Enmotus, that is because they work on enterprise-tier software. Instead of AMD trying to build this in house, they went to a company with a good reputation.

How does StoreMI work?

For most SSD-based systems, you need to run with the SSD as the primary drive, which can get quite constrictive, if you don’t have the money to buy a large one, with the StoreMI software, you can start with an HDD as your boot drive. In fact, they actually recommend this for new installs. At the same time, you don’t have to build your system with this at the start. Let’s say you build a new Ryzen system with only an HDD, then a great deal rolls around and you pick up an SSD at a great value. Normally, if you want to move your OS to the SSD, you would have to reinstall your entire system. Not so with StoreMI. With this software, you install the SSD and then software, then configure it. If you have extra, you can also add up to 2GB of it as cache for insanely fast access to those files you use most frequently.

Here is how the software works: It takes your most commonly used files and moves them to the SSD, e.g. OS files and frequently used applications and games. Make sure to back up the drive you are doing this to. Also be aware that if installing at a later time, on the first boot it up with StoreMI, the computer is going to be a bit slower with loading your programs. StoreMI needs to move them to the SSD and also load them into memory. The first time you start up the computer, you should start up your favorite programs that you want prioritized, so that it can identify them as more popular applications. After that, restart it. On the second go, it should be a bit faster. Over the next few loads, it will continue to improve in speed.

Here is the final nice thing: let’s say you want to remove this for whatever reason. StoreMI supports doing that in software that moves the files back to the HDD, and then you can change out the SSD.